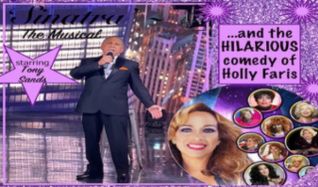 Lifelong Sinatra fans are fascinated when they hear Tony Sands start to croon. They think 'Ol Blue Eyes' has come back to life! For more than 20 years, Tony Sands has been perfecting his act, and wooing audiences all over the United States. Sands caught the Sinatra bug as a child growing up in South Philly. "When I was 12 or 13 years old, that's when I first wanted to sing," Sands says. "My family played Sinatra records all the time, and I started singing along. The next thing I knew, I just fell in love with his music…and here I am." Opening for Tony Sand's is Holly Farris as Joan Rivers. Holly has thrilled audiences from coast-to-coast with her assortment of celebrity impersonations and comedy, providing world-class entertainment for all events. Holly is a one-woman show unlike any you have seen before! From Joan Rivers to Tina Turner, Cher, Dolly Parton, Liza Minelli, Marilyn Monroe, Bette Midler and so many others, Holly offers audiences hilarious impersonations, touching portrayals, and a bit of nostalgia, but mostly just crowd pleasing warmth that has set her apart from the rest.
Venue Information:
Key West Theater
512 Eaton St
Key West, FL, 33040